This search form uses an instant search feature. As you type, search results will appear automatically below the search field. When you've entered you desired search terms use tab to navigate through the available results and hit enter to open the selected page or document.
EDIT MAIN

The East Palestine City School District provides a comprehensive K-12 education. The district's three buildings are situated in a campus style environment and service approximately 1300 students. Additional information about the schools and their programs can be found by exploring this website and the links on the left.

East Palestine is continuing its leadership role in education, a journey that began with the construction of a log schoolhouse on West Main Street in 1828. At that time, schools were funded by "subscription", not by taxation as is the case now. The teacher promised to teach a quarter, providing that enough students could be secured. Each subscriber agreed to pay tuition at the rate of $1.50 per quarter, per pupil. Sometimes parents bartered room or board instead of the $1.50 fee. In 1849 the passage of the Akron Act gave entities with population of 200 the right to provide free education. 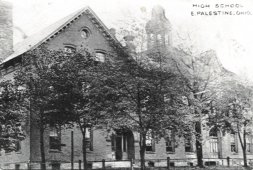 From 1828 through the mid-1870's, education was supplied to the students in a variety of one-room schools. The original one was moved to East Main Street, then in 1853 a larger one was constructed on East Main. In 1857 that building was replaced by a still larger one, however it was still a "one-room" school. One teacher was employed in 1857, for a period of three months for the sum of $60.00. The school day began at 8:00 a.m. and dismissed at 6:00 p.m., with a one-hour recess at noon. The subjects taught included reading, writing, arithmetic, English, grammar, geography and German. East Palestine was one of the few schools in the area with such an extensive curriculum. The East Palestine School District #5 was formed by action of the Ohio legislature in March 1875, and construction began on the first brick school in East Palestine, the Union School, better known as the Wood Street School. The school opened in September 1876 with a principal, who was also the Superintendent of Schools, and four teachers - one for the primary grades, one for the intermediate grades, one for grammar school and one for high school. By 1880 the enrollment had grown so that each of the first six grades had its own teacher. The first East Palestine High School graduation was held on June 12, 1885, with one graduate.

In 1903, the high schools in Ohio were divided into three grades - 1, 2, and 3 with grade 1 having the highest rating. East Palestine was one of the first in the state to be recognized as a school of the First Grade. The certificate is in the Superintendent's office in the East North Avenue building and is dated January 29, 1903.

The East North Avenue building was built in 1905 at a cost of approximately $19,000. The West North Avenue building was constructed in 1912, Captain Taggart in 1924, and the present high school in 1936. The first class to graduate from that building was the Class of 1937. The Unity School District became part of the East Palestine City District on August 25, 1956, and the Negley School District merged with us on May 5, 1958. Students from those two districts have contributed much to the growth and success of our schools. In the early 1960's the district built additions to the high school and the middle school (Elma Sutherin wing). 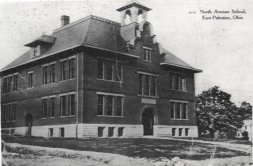 The school district passed a 5.8 million-dollar bond issue in May 1995 to develop a school campus. A groundbreaking ceremony for project was held on September 23, 1996. Dedication of the new facilities was held on January 11, 1998. A time capsule was buried in front of the new high school gym. Students in grades K-5 are housed in the new elementary school and the Elma Sutherin section of the old middle school; there is a new middle school behind the old high school gymnasium for grades 6-8. The high school is still in use as a school building, housing grades 9-12. A new high school gym has been constructed. The first basketball game in that facility was a girls' game against Southern Local on January 5, 1998. The first boys' game was also against Southern Local on January 6, 1998. The music, media and science departments in the high school have new and enlarged quarters. There are two new computer laboratories in the high school plus a Tech Prep computer laboratory. The district also built an athletic complex that includes two locker rooms and a weight room.

The bell from the Wood Street building is displayed on the lawn of the high school. The 1912 section of the West North Avenue building houses the administrative offices. The Unity building was sold at auction. The City of East Palestine has accepted the Captain Taggart Elementary School to be used as a public building, housing some city offices and social programs. The East North Avenue Building was sold at auction.

In November 1999, the district passed a 15 million-dollar Ohio School Facilities Commission building assistance construction/renovation bond issue. This project renovated the high school and the Elma Sutherin wing to current building and educational codes and provided money for new additions to all three buildings (high school, middle school and elementary school). The district has also purchased over 47 acres north of the campus as an investment in the future of the East Palestine City School District.

There is a collection of school memorabilia, including the benches from the one room school in Negley, on display in the Superintendent's office at 200 West North Avenue. Visitors are welcome any work day and at other times if arrangements are made in advance.